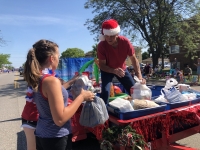 Mayor’s Office summer intern Lukas George got a workout every Friday when he lifted and loaded into his car the heavy bins of donated food from various collection sites. He then transported the food to the Parma Hunger Center, where the items were later sorted and placed on pantry shelves at 5280 Broadview Road, Parma.

“Our collection bins in our float were overflowing during the Independence Day Parade when we kicked off the drive, and the collection bins at our various city drop sites were filled to the brim each week. I tasked the intern with collecting the donations, and every week he took a carload of food and paper products to the Hunger Center,” said City of Parma Communications Director Carolyn Kovach, who organizes the Christmas in July Food Drive every year. “I am thankful for the help I received this summer from city Service Department staff, Padua High School volunteers and our summer intern who gathered donations during the parade. I am also extremely appreciative of all those who donated food or money to the drive.”

In addition to in-person donations, online donations were accepted at www.plcparma.org/donate.html. Hunger Center Co-director Dale Kraemer said monetary donations allow the Hunger Center to purchase more items because food can be bought for less and in bulk at the Cleveland Food Bank. For those who missed the opportunity to donate, it is never too late. The Hunger Center takes donations online throughout the year.

Since the beginning of his administration, Mayor Tim DeGeeter’s office has been overseeing the drive. “The food drive started before I became mayor. We have kept it going because we know most people make food donations during the holidays but not during the summer when food pantries usually see a decline in donations. For those on tight budgets or fixed incomes who are coping with rising grocery bills, the need for assistance is not seasonal. It’s year round,” DeGeeter said. “Parma residents are always generous. We appreciate all who donated at Cuyahoga County Public Library’s Snow Road and Powers Boulevard branches, UH Parma Medical Center, the Donna Smallwood Activities Center and City Hall.”