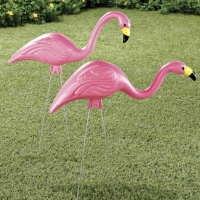 After a long hard winter, like we've had, with mounds of snow, brutal cold, and slippery walks and driveways, as mailboxes begin to fill with those colorful garden catalogs, we long for the warmth of the sun, the chirping of the birds, the lush green of the grass, and the multicolors of a floral garden. When that happens I also think of lawn ornaments, gnomes, gazing balls, ducks and geese, but most of all I think about pink plastic flamingos. So I spent an afternoon researching these flamboyant feathered friends, and here is what I discovered.

Don Featherstone was a sculptor, who was hired in 1956 to work at the Leominster, Massachusetts company called Union Products. Union Products made two-dimensional plastic ornaments for the lawn. Don was hired to redesign their very popular plastic duck into a three-dimensional piece, but, his next project became his most famous. Using photographs as a guide, he sculpted a flamingo out of clay, which then was made into a plaster cast. The first pink flamingo was born in 1957. This was also when people began migrating to the suburbs. The 1950's was a time when families increased traveling by car, bright bold colors were the rage, and pink was a big popular color. Motels, hotels and lounges were named after this flamboyant pink bird. Appliances were colored flamingo pink, and so were automobiles, like the pink Cadillac, and suburban manicured lawns used the pink plastic flamingos to infuse a bright pop of color against the lush green foliage. Initial cost for a pair of pink flamingos was $2.76.

The 1960's was an era of rebellion against the establishment. The movement to get back to nature had arrived, and hippies rallied against the plastic industry. Pink plastic flamingos were considered old fashioned and tacky. It is interesting to note that if you do a search for Parma Ohio on Wikipedia, it mentions that during the 1960's, and 1970's, Parma was the target of “light-hearted” jabs by local TV hosts, Ghoulardi, Big Chuck & Little John, and The Ghoul which focused on Parma's love of white socks, pink flamingos, chrome balls, kielbasa, pierogi and the polka. Many Parma residents were outraged by what they felt were outright slurs about their community. Others thought it was all in fun. Just so you know, I wear white socks, dine on kielbasa and pierogi, dance a mean polka, and display pink plastic flamingos in my yard, and I watched Ghoulardi, Big Chuck & Little John, and The Ghoul on TV. Oh, I also live in Polish Village.

In 1972, a movie was made titled Pink Flamingos, which became a cult classic. It is a very controversial black comedy exploitation film by John Waters, starring the drag queen actor Divine. Reviews say it is gross, disgusting and perverse. The story revolves around a group of people who live in a pink trailer in front of which a pair of pink plastic flamingos can be found. It seems as if this film began the rebirth of the pink plastic flamingo, as sales of these lawn ornaments began to pick up. In 1979 the slope of Bascom Hill at the University of Wisconsin-Madison was covered with 1008 pink plastic flamingos on the first day of classes, for a prank by the Pail and Shovel Party. By the mid 1980's the very popular TV show, Miami Vice was in full swing, and the sales of of pink plastic flamingos had increased, overselling the ever popular Union Plastics ducks.

Clubs were formed, such as Flamingo Fanciers of America, and the International Society for the Preservation of Pink Lawn Flamingos. A new business was created, lawn greeting, where in the dead of night hoards of flamingos would be set up on lawns to greet the dawn celebrating memorable occasions such as birthdays and anniversaries, thus coining the phrase “You've been flocked”. Pink flamingos popped up on tropical shirts, and was featured in jewelry design, and home goods. Pink plastic flamingos became mascots in bars, restaurants, casinos and hotels. Parma's own Ridgewood Inn, on Ridge Road is one. People would carry them while traveling and snap photos of the birds at their various destinations.

Don Featherstone won the Ig Nobel Prize for Art in 1996. The Ig (ignoble) Nobel Prize, awarded since 1991, is a parody of the Nobel Prize and is usually awarded annually in early October. Feathertone holds the honor of being the first winner to appear in person at the ceremony to accept the award. These prizes are awarded to celebrate the unusual and honor the imaginative in various fields.

In 2009 the Madision Wisconsin City Council named the plastic pink flamingo as the official bird of the city, in honor of the famous 1979 prank at the University of Wisconsin-Madison by the Pail and Shovel Party.

Locally, Flamingo Fever was born in Polish Village, the old downtown district of Parma, in the spring of 2013, and has become an annual event. Flamingo Fever was the first ever public art event in Parma. Artists, craftsman, and creative fun lovin' individuals use the pink plastic flamingos as a base to transform them into flamingo characters for use as table top sculptures. The possibilities are limited only to the imagination of the creators. These creations are prominently displayed in businesses throughout the Parma area during the summer months and auctioned off at a banquet in the fall for the benefit of the Polish Village Community Development Corporation.

The pink plastic flamingo will be celebrating her 48th birthday this year. Like most of us, she's certainly had her ups and downs. I still think she is the queen of the lawn, and feel she has a lot of life left yet. Long Live The Queen!