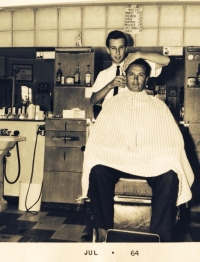 For the last 53 years, Tony Suppa has come to work each day to a place where he gets to spend time with the people he calls friends and family. They'd greet him with a smile as they walked in the door to take a seat in his chair at Total Image. The barber shop has been in operation in the same building since 1960.

It all began with a young soldier taking a chance. Tony Suppa’s father acquired his barber’s license through the GI Bill, after serving in WWII. This was a bill signed by President Roosevelt to give benefits to war veterans in gratitude of their time served. Louis Suppa then worked at Mercury Barbershop in Southland Shopping Center for several years before opening Lou’s Barbershop down the street from the current location in the late 50s. In 1960, Louis Suppa built the current barbershop at 6581 Pearl Rd.

As a young boy, Tony Suppa worked in his father’s shops shining shoes for just pennies. Louis was adamant that his son follow him in the barber profession. Upon high school graduation Tony went right into barber school. in 1964, he began cutting hair alongside his father and hasn’t stopped since!  Shortly after moving to the new location, Lou decided to venture into other businesses. Tony Suppa, fresh out of barber school and now a newlywed, purchased the business from his father, started paying rent and formed Man’s Image.

In the 1960s Tony was cutting mop top haircuts and pompadours made popular by The Beatles and Elvis Presley for $2.00 a cut. In the 1970s, it was hip to be a hippie and many men grew their hair long causing the hair cutting business to struggle. Tony was determined to create and maintain a successful business. He changed the name to Total Image Hair Designers and became a full-service salon. At the time, Total Image was one of three full service salons in the Cleveland area. In the 80s while designing mullet and slick- backed hairstyles for his customers the business really took off. Next, the longer, texture styles began to appear in the 90s brought on by the popular boy bands. The turn of the century brought on many new styles in hair and Tony has done them all from Mohawks, to tapered styles to buzz cuts and more.

Suppa, who is 72, admits that It's been tough saying goodbye to a shop that’s been like a second home to him. Not only will he miss his work but he will deeply miss his customers. Some of his customers have been getting haircuts from Suppa for decades. He’s even cut three generations of hair in some families. At times when clients were unable to make it into his shop due to sickness or becoming disabled, Tony would pack up his supplies and go to their homes to cut their hair. These people are not just customers, they are friends and that’s what he will miss the most! He will always have fond memories of a place where he not only cut hair, but formed bonds.

In May 2017, Total Image Hair Salon closed its doors forever. The property has been sold and the new owner is going to renovate the space for their own business needs.  Suppa may have packed up his tools and sold his chairs and building, but he isn’t ready to completely quit. He will be cutting hair part-time down the road at Suburban Barber Shop and he hopes to see familiar faces.