The Pipes, The Pipes Are Calling This Parma Heights Resident 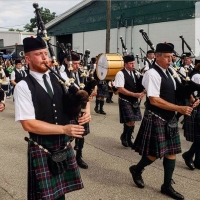 As a child, Andrew Fowler used to fall asleep to CDs of bagpipe music. He also used to listen to them at his paternal grandfather’s house. Fowler, 26, began playing the bagpipes at age six and began participating in bagpipe competitions at age 9. Today, the Parma Heights resident of Springwood Road is a member of two local pipe bands – he’s the Pipe Sergeant of the 87th Cleveland Pipe Band, and the bass drummer for the Great Lakes Pipe Band -- and regularly plays for weddings, funerals and other occasions. “I love the sound of well-tuned bagpipes,” Fowler said on a recent rainy Wednesday evening.

With St. Patrick’s Day approaching on March 17, this conversation seems somehow appropriate. “It (playing the bagpipes) is definitely in my heritage. They are a very distinctive instrument,” Fowler said, recalling that his father’s oldest brother – a retired North Royalton firefighter – used to play them at various family functions. The woodwind instrument takes excellent coordination, more than lung support to play, Fowler explained. And yes, St. Patrick’s Day is the busiest day of the year for a bagpiper. ”It’s a 14-16-hour day on average,” he said.

Fowler’s day job is as manager-in-training at the car wash of Yorktown Service Plaza, 6177 Pearl Road, Parma Heights, where he’s worked for two years this coming May. Yorktown is, of course, owned by longtime area businessman Doug Shull and his family. “There’s not enough good things I can say about the Shull family,” Fowler said.  “They’re solid people.” A 2012 graduate of Valley Forge High School, he’s studied for one year at the College of Wooster, dropping out due to expense.

When he’s not running the car wash at Yorktown, Fowler is playing his beloved bagpipes. Sometimes that means working with his friend Sean Lowry, a snare drummer who hails from Brook Park, or with his fellow bandmate and piping teacher Michael Crawley of Parma. Fowler and Lowry as a duo charge $150 per half-hour to play for local functions. According to Fowler, a decent set of bagpipes go for anywhere from $1,000 to $1,500.

So what are the most requested songs for a bagpiper? Fowler says “Amazing Grace,” “Danny Boy,” and, believe it or not, “Long Way to the Top,” made famous by AC-DC. “It’s very fulfilling for me,” he said of bagpiping.  “It makes me feel like I’m doing something out of the ordinary. I’ve met people from all across the country and the United Kingdom because of piping.” He competed in the World Pipe Band Championships in Glasgow, Scotland in 2015, and is going back across the pond this summer from August 12-19. His father, Mark, a retired steelworker, is of Scotch and Irish descent, while his grandmother’s parents came from Tipperary, Ireland. He jokes that, “I got the full leprechaun package – red hair and blue eyes.” Yorktown is a family affair for Fowler, whose mother, Dottie Wenger, works there as well in customer outreach.  Rounding out Fowler’s family is older brother Dan, 29. Fowler is available for those in need of his bagpiping services. Contact him via e-mail at DRUMMER7289@yahoo.com. Happy St. Patrick’s Day!

In other Parma Heights news:

ONSTAGE AT THE CASSIDY THEATRE – The Cassidy Theatre will present Children of Eden, based upon the book by John Caird, with music and lyrics by Stephen Schwartz from April 12-28. The production is based on a concept by Charles Lisanby with orchestrations by Bruce Coughlin and Martin Erskine.

For more information or to purchase tickets, call the Cassidy Theatre Box Office at 440-842-4600.

The school is located at 9999 Independence Boulevard.

A SPECIAL PERFORMANCE – Raisin’ Canes, the Parma Senior Center’s Vaudeville Dancers will present a special St. Patrick’s Vaudeville Show from 7-8:30 p.m. Monday, March 11 in Meeting Room A of the Parma Heights branch of the Cuyahoga County Public Library. Register online for the program at www.cuyahogalibrary.org.

SPEEDWAY REDUX – Speedway has announced a new 4,600-square-foot gas station at the southeast intersection of Pearl Road and West 130th Street on a nearly two-acre parcel of land. The opening is anticipated in 2020.

The project will also include a Speedy Cafe, which is a fast-casual restaurant where customers place their orders on a self-serve ordering kiosk.

For many years, Speedway had occupied the exact same location before a previous station was demolished more than a decade ago.