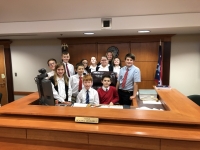 Students from The Academy of St. Bartholomew visit Judge Deanna O'Donnell in her courtroom.

Last month I began a new series on Parma’s three branches of government by reporting on Parma City Council’s committee structure. My plan for 2019 is to report on various aspects of the legislative, judicial, and executive branches of your local government. This month I interviewed Parma Municipal Court Judge Deanna O’Donnell.

Judge O’Donnell grew up in Parma and attended St. Bridget Elementary School and Holy Name High School. While in elementary school her classmate, Craig Mackovjak, would often chase her home. She would always beat him in these chases and complain to her mother about them when she got home. “You will marry that boy someday,” her mom would say. In fact, the two would end up attending kindergarten through twelfth grade together. Always a softy for stories of how couples meet, the story brought tears to my eyes, as her mom’s prophesy came true. The two raised four beautiful and successful children, two of whom were former high school students of mine. Sadly, tragedy struck the family and their many friends in 2011 when Craig was fatally injured at work.

Following high school Deanna attended Baldwin Wallace achieving a degree in political science. A thirst for knowledge led her to taking the Law School Admission Test and gaining entrance to Cleveland-Marshall School of Law. “It was not easy attending law school and being the mother of two at the time. In fact, one of my professors questioned my ability to be successful. This just made me work harder and, thanks to the support of my family and friends, I succeeded,” she explained.

After law school, she worked in a small law firm, acted as a juvenile court magistrate and, later, served in the City of Parma Law Department as Assistant Law Director and Chief Assistant Law Director under Law Director Timothy Dobeck. When Parma Judge Mary Dunning announced her retirement, Deanna decided that she would seek the position. “I know it sounds like a cliché, but I wanted to do something to make a difference. I wanted people to be better off because they met me,” she explained. She was elected in 2007 and again in 2013.

When asked what she enjoys about being a municipal court judge, Judge O’Donnell explained that she feels she has the ability to make a difference in the lives of the defendants that come before her. Unlike many felony defendants who go to the county court of common pleas, those who come before her it is their first-time offense. They are typically scared and do not understand “the system.”

“Too many people have a jaded view of how our courts work, due to television. I take my position very seriously. As judge, I must maintain judicial temperament. It would be inappropriate for me to yell at people. I look every defendant in the eyes and give them time to explain their side of the story,” she explained. “I do not get lost in the title of ‘judge,” she added. She clearly sees her job as judge as the Founders did – that everyone is entitled to a defense and is innocent until proven guilty.

Parma is lucky to have such an energetic, hard-working, fair-minded judge in Judge Deanna O’Donnell. “I look forward to going to court each day in hopes of giving back and making a difference in the community. It is a very high honor to serve the community as judge,” she added before we parted.

I hope you enjoyed this month’s column. As always, I welcome your ideas. Send them my way at councilmanbrennan@sbcglobal.net. Best wishes as we approach the spring season!