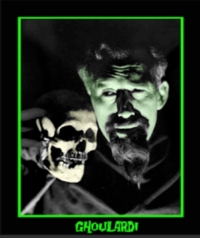 Pa-a-arma! If you were to tune in to channel 8 at around 11:30 PM Friday nights, back in 1965, that's what you would have probably heard coming from your television set. You would have also seen a funny looking man, wearing a fright-wig and lab coat, smoking a cigarette on live television. His name was Ernie Anderson, and he was a Cleveland sensation, from 1963 to 1966. The late-night TV horror host character he invented was “Ghoulardi” ─ a barbed-beatnik. The show was called “Shock Theater”, which aired 1950’s horror flicks with intermissions of Ghoulardi’s sly comments on how bad the movie was. At times, with jazz music playing in the background, he would even blow up something with fire-crackers on live television.

Back in 1963, there was nothing else like it on television. No matter how rude it seemed, Ghoulardi usually spoke whatever was on his mind. Not only did he bash his competitors on other television stations like Mike Douglass on Channel 3 and Dorothy Fuldheim on Channel 5, Ernie even took shots at hosts that aired on the same network as his. Local politicians, like the Mayor of Cleveland, were also targets of his critical remarks. Many adults loathed him, but the teenagers worshiped him. Unfortunately, what younger minds perceived from his message was that it was cool to be rebellious and make fun of others. Because the Friday night show was live, the TV 8 station manager was constantly worried about what Ghoulardi would say next.

In 1965, Shock Theater’s cameraman, Chuck Schodowski, decided to move to Parma, Ohio instead of Willoughby, where Anderson lived. Because of this decision Ernie Anderson began making fun of the City of Parma’s manicured lawns and the plastic pink flamingos that decorated them. Not only did Ghoulardi begin to ridicule the Cleveland suburb on a regular basis, he produced whole satires degrading the city on his late night show. It was called,“Parma Place”, which was derived from the hit prime time soap opera, “Peyton Place”. The skits were about the city’s certain Eastern European population, and the wearing of their white socks. Ernie Anderson even played the main character on “Parma Place”, who’s profession was raking the muck out of Lake Erie, making fun of the lake’s pollution problem.

Even though some political officials in the city, including the Mayor of Parma, expressed outrage with the assault on their city, many Parmainians felt privileged that the popular “Ghoulardi”, was talking about their city on live television. Eventually, after 4 years, towards the end of 1966, Ernie Anderson became bored with the whole “Ghoulardi” act and headed out to Hollywood to break into the entertainment business. Ever since then, others have come and gone, trying to gain the same high status that Ghoulardi gripped Northeastern Ohio with.

I am a non-profit video producer who produces national, and international documentaries for public access, private and goverment networks .