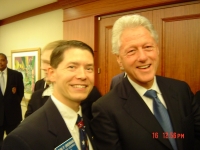 This month I am continuing my series entitled Civics 101. The hope is to provide you with useful information about your local, state, and federal governments. So far I have covered municipal (city), school district, county, and state governments here in Ohio. This month I will write about our federal government, focusing on the executive branch.

According to Article II of the U.S. Constitution, “The executive power shall be vested in a President of the United States of America.” The original Constitution allots the President a four year term with no term limits. However, in 1951, following the four elections of Franklin Delano Roosevelt, a two terms limit was instituted with the Twenty-Second Amendment. Incidentally, the Amendment allows a President to serve up to ten years, if they were Vice-President and took the office of President with two years or less left in the term of the President who left office. Under the current administration, if Joe Biden left office before January 20, 2023, Kamala Harris would serve out the rest of the current term, but would only be eligible to serve one more term.

What are the qualifications to be president? Is there a gender, education, or religious requirement? The Constitution has only three requirements, including being at least 35 years of age, a natural born citizen, and reside in the United States for at least 14 years. Each semester I point out to the students in my American Government courses that George Washington was NOT a natural born U.S. citizen, as when he was born in 1732, the United States did not exist. The Constitution, of course, allowed for anyone who was a citizen at the time of the adoption of the Constitution to be eligible, otherwise no one would have been.

The President and Vice-President are elected by the Electoral College. Each state is allotted a number of electors equal to the number of members of the U.S. House of Representatives and U.S. Senate it has. When the next Presidential election takes place, Ohio will have 15 members of the U.S. House (I will explain how we lost one due to the 2020 census next month.) and, like all states, 2 U.S. Senators, for a total of 17 electoral votes. To win a state’s electoral votes, the candidates must win the popular vote in that state. Ohio is a winner-takes-all state, like most. The candidates who win 270 or more of the 538 electoral votes are elected President and Vice-President.

The Constitution empowers the President to be the Commander-in-Chief of the armed forces, to grant pardons, to negotiate treaties with foreign nations, and to make appointments to federal offices. As Commander-in-Chief, the President may send our servicemen and women into battle. The pardoning power allows a President to essentially give a “get out of jail free card” exonerating someone of federal crimes. Treaties negotiated by the President require a two-thirds majority of the Senate to be ratified. Finally, the president appoints Cabinet members, federal judges, and foreign ambassadors, among others, but each requires a confirmation vote of the U.S. Senate.

The Founding Fathers also created a method for the removal of a President for “treason, bribery, and other high crimes and misdemeanors.” Again, I begin this unit of study with my students by asking them to define “impeachment.”  I then ask them, “How many Presidents have been impeached?” and “How many Presidents have been removed?” The answer is three and zero respectively. The U.S. House has the power to impeach or charge with a crime.  A simple majority of 218 of the 435 members is necessary. The U.S. Senate then holds a trial where 67 of the 100 are needed to find guilty and remove and/or bar from holding another federal office in the future. Presidents Andrew Johnson, Bill Clinton, and Donald Trump (twice) were impeached by the U.S. House. However, following their trials in the U.S. Senate, none were found guilty and removed. Incidentally, Richard Nixon resigned before being impeached.

Once again, I hope that you found this column informative. To find out more about the President, I encourage you to read the U.S. Constitution. One of the most enjoyable academic endeavors is reading the letters of our Founding Fathers, especially those of George Washington. There are many great website where you can find them.

In closing, I have been contemplating giving community lectures about the topics I cover in my government and law courses. Let me know if this is something you think folks would be interested in by dropping me a line at BrennanforParma@gmail.com. Best wishes for a great beginning of summer on June 21.