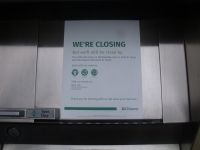 Sign at Citizens Bank in Ward 1 informing customers that they will no longer have a bank at all in their neighborhood, after they have supported it for nearly 50 years.

Nearly 50 years ago, in a grassy field on Chevrolet Blvd. north of Snow Road in Parma, a brand new bank was built. First Federal was where I had my first bank account, started with my paper route money when I was 10 years old. Eventually the bank changed to Charter One, and in recent years Citizens Bank. When the National City Bank across the street closed, Citizens Bank became the only bank in my part of Ward 1. It has served the needs of this neighborhood well for many years since then.

Imagine our disappointment when the bank revealed that it is closing in July. This means that our neighborhood will now be without a bank to serve local residents, especially those who do not drive and depend on this nearby financial institution for their banking needs. I know of many Seniors who are now left with no way to carry out basic financial transactions which are essential to modern living. This has only added to increasing inequities in our part of Ward 1- including the fact that we no longer have a grocery store, schools, parks, and only recently. the 7-11 next door to the bank stopped selling money orders, causing people who can't drive to walk nearly 2 miles if they wish to purchase this simple necessity. All of this in a part of Parma that has within it the largest tax payer in the city.

Paradoxically, while travelling on Pearl Rd. in the Old Brooklyn neighborhood in Cleveland, I discovered that Citizens Bank has built a brand new bank in that community. So after 50 years of serving our neighborhood, we are rewarded with our bank being closed, and this area is benefiting from having a brand new bank being built there by the same company? Am I the only one who feels that this is a tremendous kick in the teeth, to say the least? I have had a bank account at this location for 50 years, and now I feel that I am being abandoned by this company as they turn their backs on me and the rest of the people in my community.

Speaking for myself, I intend to close my account at Citizens Bank as soon as they abandon our neighborhood, after having an account at that building for nearly 50 years. I won't be travelling several miles just to have the "privilege" of giving them my business. I will gladly do my banking with any bank willing to take their place and establish a location in my part of Ward 1, an area that has many willing customers in strong need of a local bank who values their customers. I have personally embarked on a campaign to reach out to the many other banks located in the Parma area and invite them to open a branch here. I am wondering about the level of concern held by the Parma Area Chamber of Commerce, the City of Parma Community Economic Development Office, and the Parma City Council Representative for Ward 1.  I certainly hope that they also feel for the residents and their loss of the one remeining bank in our immediate area. The sign on the bank says "We're closing, but we're still close by". They are abandoning and deserting our neighborhood, but still urge us to show loyalty and continue to provide our money to their business. How about "NO"?