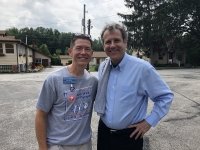 This month I am continuing my series entitled Civics 101. The hope is to provide you with useful information about your local, state, and federal governments. So far I have covered our municipal (city), school district, and county governments, as well as Ohio’s state government and the executive branch of the federal government. This month I will write about our federal legislative or law-making branch.

According to Article I of the U.S. Constitution, “All legislative Powers herein granted shall be vested in a Congress of the United States, which shall consist of a Senate and House of Representatives.”  Thus, our federal legislature is bicameral – made up of two houses or chambers. You might recall from your schooling that this was due to what was called The Great Compromise. When the Constitution was being debated in 1787, the delegates from states with small populations wanted equal represented for each state, while those from larger populations preferred proportional representation based on population. The result was that each state is entitled to two senators in the U.S. Senate, as well as a number of representatives in the U.S. House of Representatives based on population.

The U.S. House consists of 435 voting members who are elected to two-year terms with no term limits. They are sometimes referred to as Congressmen or Congresswomen. Each state is guaranteed at least one representative, thus states with small populations like North Dakota and Wyoming have only one. California has the most with 53, while Texas has 36, New York and Florida have 27, and Ohio has 16.  Because it is population-based, the number of representatives can change based on shifts in population. This occurs every ten years following the U.S. Census. After the population is counted, the U.S. Census Bureau reapportions or divides the number of representatives allotted to each state. Thus, as a result of the 2020 census, Ohio, New York, and California, for instance, will each lose one representative, while Florida will gain one and Texas will gain two. Ohio is losing one due to our slow population growth rate.

Each member of the U.S. House represents a district, unless the state only has one member. Currently, Parma is divided between the 11th and 16th Congressional Districts. Democratic Congresswoman Marcy Kaptur represents the 11th district which runs from the Toledo area along Lake Erie and includes the northern portion of Parma. Parma’s southern half is part of the 16th district which is represented by Republican Anthony Gonzalez. Starting next year Parma will be part of the 7th district, so we will be electing a new representative this year. The presiding officer of the U.S. House is the Speaker of the House who is currently Democrat Nancy Pelosi of California.

The U.S. Senate consists of 100 Senators who are elected to six year terms with no term limit. Every state is entitled to two U.S. Senators. Ohio’s current U.S. Senators are Democrat Sherrod Brown and Republican Rob Portman. Portman is not seeking re-election this year, so we will be electing a new U.S. Senator for Ohio. Brown is up for re-election in 2024. The President of the Senate is the Vice President, currently Kamala Harris. The Constitution only allows the presiding officer to vote when there is a tie.

Congress is the lawmaking branch of our federal government. In a nutshell, a bill must pass both Houses in order to become a law. This is not easy, as this requires at least 218 members of the House, while a super-majority of 60 votes is needed to pass most bills in the U.S. Senate. If a bill passes both Houses, it is then sent to the President who may sign or veto the bill. If vetoed, the bill may be overridden by a two-thirds vote of both Houses of Congress in order to become a law. Both vetoes and overrides are very rare.

There is a lot more to know about Congress and lawmaking. I encourage you to read the U.S. Constitution and pick up a book about Congress. I guarantee you will find it fascinating reading. I hope to see you in the Ukrainian Independence Day parade on State Road on August 27. Stay well.