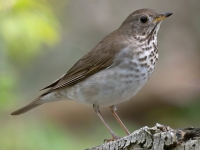 Last month, the first of its kind in North America, "Icebreaker," an offshore Lake Erie wind turbine project, was green-lighted by top dog legislators in Ohio.

Considering this is unprecedented, with the whole world watching, all stakeholders should have been included. Instead, valid concerns continue to be overshadowed by the need for quixotic solutions, corporate greed, and officials’ contempt for the rule of law.

Some of the first objections came from a suit filed by eastern lakeshore residents who asserted unintended consequences for birds. It was enough to stagger the project, perhaps because developers and builders are getting hip to lawsuits that claim even unintentional harm to birds caused by our built environments. They should be worried. The U.S. boasts over 50 million birders, and the birding industry generates at least tens of billions of dollars annually.

More reason for pause: The lone Supreme Court dissenter in the 6 to 1 vote, Justice Sharon Kennedy, claimed there was not enough done to show bird populations won’t be negatively impacted by Icebreaker. Her opponent, Jennifer Brunner, who’s also opposing Kennedy for chief justice position this fall, alleges these turbines pose no significant harm to birds. But there’s no paradigm on which to base Brunner’s assumptions.

Justice Kennedy may be right. We don’t know what we don’t know, and the implications could be staggering because, as discussed below, Ohio government colludes with businesses to keep bird and bat mortality data secret. It’s likely that, had all stakeholders -- ornithologists, thought leaders, citizen scientists, and birders -- been included, we would have brainstormed a site-monitoring program as unique as the project itself, one that would allow for adaptations to the turbines and areas around them.

One statistical qualifier: Experts agree the leading cause of birds deaths -- one billion annually in the U.S. – result from collisions with reflective building materials, mainly glass, mostly residences. But while bird deaths caused by glass are incomparably more than those from encounters with wind turbines and outdoor cats, we should still be concerned about this offshore project.

How many more turbines and public violations will this novel project spawn? How can data be tracked from flocks that collide with turbines -- ironically intended to curtail emissions that would make a better world for birds and all life -- while bird pieces and parts quickly disperse on Erie’s notoriously choppy surface, or sink to the bottom?

First, we admit that exhausted, migrating birds do sleep while flying along ancient migratory paths. On autopilot, birds will fly right into turbine blades. Next, we admit that our Public Trust Doctrine (humans are equal stakeholders in wildlife) and Ohio’s Sunshine Laws (guaranteed public and media access to records and certain meetings created by public bodies) have been routinely violated. Then, we take responsibility for voting into Ohio government those who disregard the rule of law and others’ rights in the examples that follow.

How does the ODNR, a state agency, override 100 years of federal bird protections under the Migratory Bird Treaty Act (MBTA), the oldest wildlife protection act in America? It’s no coincidence: The same year ODNR violated Ohio Sunshine public records laws concerning BSBO mortality data, in 2016, Trump quickly dismantled MBTA, which had prohibited the illegal “take” of migratory and other birds. Thankfully, under the new administration, federal migratory bird protections have been reinstated.

But now we know we can't trust Ohio lawmakers with important conservation issues. Here's more proof: After it was signed into law, a first of its kind anywhere in the world rights-of-nature act, the Lake Erie Bill of Rights (LEBOR), was overturned by state attorney general Dave Yost who ruled in favor of an animal agribusiness company. Once again, company owners sued and won, this time, for the right to pollute Lake Erie with animal waste.

Proponents for the offshore wind farm have made the dubious claim it will create $253M in revenue for our region, plus a bunch of jobs.

Certainly, that gray-cheeked thrush flying thousands of miles from the tropics on his way to summer breeding habitat in Canada will appreciate economic impact while being shredded.

If one bird dying doesn’t move the needle, consider that's all it took for this writer to retrofit our home's windows after seeing a robin collide with one at top speed. He died. And that's all it took for Fatal Light Awareness Program (FLAP) founder, Canadian Micheal Mesure, to begin a movement that has helped countless birds on an international level. One little bird died in his hand after colliding with glass, and it forever changed Mesure’s heart, and the world around him.

One bird . . . one horrible thump . . . one billion birds still die every year in the U.S. after colliding with windows, despite increasing awareness and plethora of affordable, attractive anti-collision films and other products.

If we can't trust ourselves to protect birds in our own yards, what makes us think we can trust government officials who've demonstrated zero environmental stewardship to decide an offshore project that raises more questions than it answers?

It’s right to be outraged over government apathy, obfuscation, and illegal maneuvers, but better to be a DIYer. Researchers insist reflective materials must cover the entire outside of windows, which feathered friends confuse for habitat, so do it!

Meantime, maybe something will stagger the Icebreaker turbine project so long that its developers give up. Beaks crossed.