Parma And The World Still Stands With Ukraine 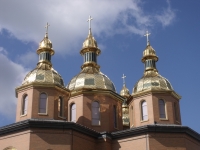 Ukrainian Village in Parma was the place on August 27 where once again all eyes focused on Ukraine and the ongoing atrocities committed by the ruthless dictator Putin on these innocent people. The Ukrainian Independence Parade held annually here was especially poignant this year after what has unfolded just 6 months ago. One of the very largest parades ever held in Parma, with at least 66 floats, it was a very inspirational event, with so many people coming to show their unwavering support in this time. Ohio Governor Mike DeWine was there and spoke to those assembled, as well as US Senator Rob Portman, Ohio Congressman Tim Ryan, Parma Mayor timothy J. DeGeeter, Parma City Council President Sean Brennan, and so many others. We were all very proud to see such a turnout for our friends and neighbors, and it is so wonderful that we have such a thing as Ukrainian village in our city. A naturalization ceremony was conducted where 15 brand new Americans were sworn in, and this above all served as a reminder of how special  being a citizen in a free country is, and how we all can take it for granted from time to time.