Tiny Bubbles For A Great Big Cause 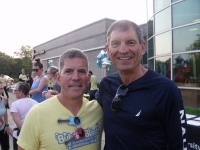 Dean DePiero aloing with Bernie Kosar. Everyone was thrilled to see that the surprise starter of the 5K Run/Walk was Bernie Kosar, who delighted the crowd with his remarks and good humor.

On September 17 the North Royalton YMCA hosted the 5th Annual Bubble Blast 5K Run and Walk. This race is dedicated to the memory of Kathlene Cochrane Depiero, a former YMCA Board member, who is credited with starting the event back in 2016, first held in Parma. Her husband Dean DePiero, former Parma Mayor, is always front and center at this event, and this year he brought in a guest starter for the race, none other than former Browns great Bernie Kosar. This was quite a surprise to the participants, on a beautiful crisp September morning. The event went off without a hitch, and everyone thoroughly enjoyed themselves, knowing that this race raises much needed money for many important  services and programs at the YMCA. I ride my mountain bike out here from Parma every year and it is usually my last big ride of the season. This year while riding back on those big State Road hills, Kathlene was on my mind as I remember her, and I couldn't help but think how proud she would be seeing her children growing up and her husband keeping her alive in the hearts of so many who loved her dearly.