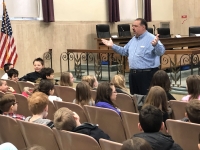 After a two-year hiatus due to COVID, the Anthony Zielinski Leadership for Tomorrow program has returned to Parma City Hall and the Justice Center. The program, which runs from early November 2022 to late March 2023, gives fourth graders from nine Parma schools a glimpse into how municipal government and courts operate. “We are excited to have students come back. It is great to see youth work on their own legislation during a mock council meeting. They roleplay elected officials, passing ‘laws’ with lots of discussion. Of course, the students love the tour of City Hall and the Justice Center, as well as visiting the mayor. Plus, they get pizza for lunch,” said Treasurer Tom Mastroianni, who gives a presentation and also acts as emcee and City Hall tour guide.

Funded by Cox Communications, the live civics lesson is named after the late Treasurer Anthony Zielinski, who developed the program with Parma Mayor Tim DeGeeter and Mastroianni in 2005. In coordination with school leaders, arrangements are made to transport students to City Hall, where they learn about the different branches of government from Parma’s elected officials and directors while seated in Parma Council Chambers. After the City Hall visit, they travel to the Justice Center where they listen to a judge’s presentation in a courtroom. They learn about the justice system and roles of the bailiff, lawyer and judge. “Tom keeps it light to hold the students’ attention, but he addresses the serious role that city government plays in students’ lives now and later when they are adults. The program helps them connect the real world to what they are learning in the classroom,” DeGeeter said. “Who knows? Maybe one of the students who passes through City Hall is a future mayor.”