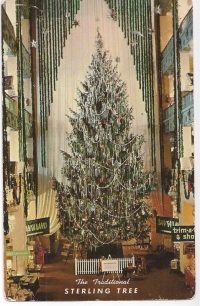 There is a new sequel to the classic holiday movie "A Christmas Story" about Ralphie showing his children the wonders of Christmas in his youth. This is a column that i wrote a few years ago and I felt that it was entirely relevant again. We all have our unique Christmas stories and here is mine from growing up in Parma during the 1950s.

I grew up near the intersection of Pearl and Ridge Roads in Parma and attended Ridge Brook Elementary School. I walked to and from school because my family lived only two blocks from the school and my mother was usually home then. It was usually on a Friday during December that we had our big Christmas adventure. That was a shopping trip downtown to the big department stores and to see Santa Claus.

During the Christmas season downtown Cleveland was a wonderland for a boy. When we went downtown, we dressed up. That meant that after coming home from school, we had to change out of our school clothes into our “church clothes” that were nicer. My mother never wore slacks shopping. She always wore a dress, especially when she went downtown.

After my brother, sister and I got home from school and changed clothes, my mother walked us another two blocks to the Pearl and Ridge intersection where we caught the #79 bus downtown. Our family only had one car and father drove it to work during the week. Upon arrival downtown, we would head toward Higbee’s where we could browse the toy department and see Santa Claus before meeting our father at the Frosty bar where us kids got a hot dog as well as a frosty. Father would drive downtown and park near his favorite restaurant, the New York Spaghetti House on East 9th Street.

At Higbee’s we would visit the Twigbee Shop where we could buy Christmas gifts for our parents and family. Store employees dressed as elves helped us kids choose gifts and manage the money that our parents had given us to spend. No adults were allowed inside the Twigbee Shop except the elves.

Then it was off to the other stores. We visited the May Company on Public Square and got to smell the scent of the roasting nuts at the Nut House near the May Company. A bag of freshly roasted peanuts was a must buy there. We walked from the May Company all the way to Playhouse Square to the big events; the 7th floor of Halle’s with Mister Jingaling, the Keeper of the Keys and to the Sterling Linder store across the street with their giant Christmas tree.

Halle’s 7th floor was THE toy department for everyone. Of course, it was special to see Mister Jingaling as well as Santa. But across the street at the Sterling Linder store was the big thing, their huge Christmas tree that was ginormous. Under that tree was a magic Winter Wonderland with a little train that took good boys and girls through a magical forest to Santa Claus. They also had Francis the Talking Mule there who would talk to the boys and girls about Christmas and whether they had been good. Then if we had been good, we got a toy from Francis the Talking Mule.

Occasionally, there would be famous local personalities at Sterling Linder and one year I got to meet Bob Feller and get his autograph on a card featuring the big Sterling Linder Christmas tree. I still have that card, dated 1958.

Then after all that excitement, us kids were dead tired and our family made their way to the New York Spaghetti House where we could have a real dinner before heading home.

But alas all those stores are gone. One by one those downtown department stores closed and moved to the suburbs. Higbee’s was the last one remaining and it had changed its name to Dillard’s before closing its doors in 1996. But somehow the shopping malls and big box stores lack the magic of Christmas shopping downtown.

Lee has been working with Medicare, Medicaid and private health insurance since he began working at the Erie County Welfare Department in January 1973 where a major part of his job was determining eligibility for Medicaid. He went into the private insurance business in 1977 with Prudential Insurance Company and within a short time had become one of the company’s top sales agents. In 1982, he was promoted into management where he managed two field offices and as many as thirteen sales agents. After leaving Prudential in 1986, Lee decided to become more focused on health insurance and employee benefits. He has advised many local employers on how to have a more cost effective employee benefit program as well as conducted employee benefit meetings and enrollments for many area employers. The companies Lee has worked with ranged from small “mom and pop” businesses to local operations of large national companies. Lee received his B.S. degree from Kent State University where he has been active in the local alumni association. He has completed seven of the ten courses toward the Certified Employee Benefit Specialist designation. He has taught courses in employee benefits and insurance at Cleveland State University and local community colleges. In addition, Lee is an experienced and accomplished public speaker. He has been a member of Toastmasters International where he achieved the designation of “Able Toastmaster – Silver” in 1994. He has also served as a club president, Area Governor and District Public Relations Officer in Toastmasters as well as winning local speech contests. Lee has also been a member of the Greater Cleveland Growth Association’s Speaker’s Bureau where he was designated as one of the “official spokespeople for the Rock and Roll Hall of Fame” prior to the hall’s opening in 1995. He has given talks and presentations before many audiences including civic organizations, AARP chapters and many other community groups. With the implementation of the Medicare Modernization Act (Medicare drug bill) in 2006, Lee has shifted his focus to Medicare and helping Medicare beneficiaries navigate the often confusing array of choices and plans available. As an independent representative, Lee is not bound to any one specific company or plan, but he can offer a plan that suits an individual person’s needs and budget. In addition, Lee is well versed in the requirements and availability of various programs for assistance with Medicare part D as well as Medicaid. While he cannot make one eligible, he can assist in the process and steer one to where they may be able to receive assistance.