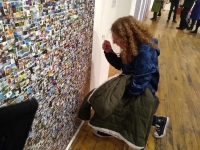 Cleveland Photo Fest was created in 2019, their parent organization is Cleveland Photographic Workshop (est. 1978), they seek to promote worldwide Unity Through Photography. Since 2019 they have sponsored several exhibits throughout the greater Cleveland area, and photo swap exhibits with India and Australia. Their latest is One Million Photos, the most inclusive ever photographic exhibit in Cleveland. The call went out early this year for amateur and professionals to send their submissions, free of charge, for this exhibit. No theme, just your favorite photos. Included were several thousand submissions from local high school and college students. For many photographers this was the opportunity to show at their fist exhibition. It was a dynamic idea and partially funded from a grant from Cuyahoga Arts & Culture and Gemini Developers.

The exhibit opened Friday, November 18th at Bostwick Design Art Initiative at 2731 Prospect Ave. Unfortunately they didn’t reach their million goal but on display were approximately 200,000 photos that were received. Although, I do believe they exceeded the world record. How do you display all those photos? They came up with a unique idea.

Upon arriving at the gallery, spectators received a small magnifying class. On the walls were several panels, floor to ceiling. The photos were about postage stamp sized, and arranged as a collage. And so the search began, magnifying glass in hand searching through the photos. It was a fun unique exhibit. Refreshments were served also to the approximately 200 visitors opening night, who also listened to music provided by The Prom Queens.

Several Parma photographers were in this exhibit. The exhibit will be on display until the end of December. For more information on Cleveland Photo Fest visit their Facebook page or the web page clevelandphotofest.org.