Stop The Cull - Save Our Deer 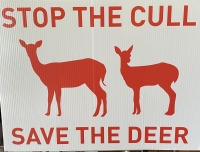 Mayor Gallo is planning on disturbing the peace in Parma Heights by killing off the city's greatest asset. She has planned a deer cull for January, 2023 after the mating season. This fact is very disturbing as her “hired killers” the Parma Heights Police, will be killing female adults but also the babies they are carrying as mating season occurs in the 2 months prior to her kill.

We moved from the city to Parma Heights for the deer. We believe their presence is the community's greatest asset. We found peace here among deer and a few kind people we call neighbors. The Humane Society has helped communities along the east coast. Their program “shoots” females with a hormone that will delay ovulation for 3 years! Deer react to culling!. They sense a vacuum in their numbers and nature takes over to fill the vacuum. They produce twins and triplets to fill the void left by the cull. The phrase “nature abhors a vacuum” is appropriate here.

Mayor Gallo is blaming car accidents and injuries on the deer as well. The deer have become the scapegoats for the mayor who blames them for the traffic accidents. Night accidents in Parma Heights are caused by nonexistent street lights. Some neighbors have erected pole lights of their own. A street light project for the neighborhoods must be in the mayor's plan to control traffic accidents because it is the lack of light at night that is the cause of accidents and fatalities.

Culling is not the answer. The deer increase their numbers to fill the void. So, killing will go on and on. Use the Humane Society program – control deer reproduction with ovulation hormones. It is the civilized way to handle the deer population problem in the year 2023.

We want to coexist with deer in our peaceful community without culling or chaos.